Groupthink: the Lighter Side Table of Contents 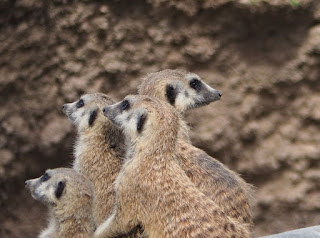 The image is titled "Meerkat Groupthink" by "joiseshowaa." The URL for joiseshowaa is https://www.flickr.com/photos/joiseyshowaa/, the image itself can be obtained here.

Groupthink: the Lighter Side

An emerging telepathic group consciousness called the Coalition is born...in a prison for murderers and psychos. Does humanity have a future in a world run by a psychotic super-mind?

All truly great writers do lots of research before writing their stories. This is one of the many reasons why I'm not a great writer. I have no clue if this story even lives in the same neighborhood as reality, I have no clue whatsoever what life is like in jail, and the only thing I know about the FBI is the factual reporting that I've seen in the X-Files.

I chose the name of Attica because I'm lazy and did not feel like coming up with a real name – most people will not recognize the name of a prison aside from Alcatraz, but that has an extremely specific meaning. Attica sort of sounds familiar, but most people can't place it. Or at least I can't. I think it is (or was) in upstate NY. I think it was where some famous prison riots occurred.

There was supposed to be a companion piece called "Groupthink: the Darker Side" that deals with a negative version of the story. but I never got around to it.

This story ends kind of abruptly.  At some point I should finish it.

Schrodinger's Test is Up!